Thank you for your interest in Maruti Suzuki Arena .
Due to the on-going COVID19 situation, we are putting the health and well-being of our employees and customers above everything else. Please expect a delay in response at this time. We would urge you to practice social distancing, stay at home, and follow the Government’s directives to help contain the spread.

“I thoroughly enjoyed a unique session held in my school. I loved listening to all the stories by Grandma! She taught me to completely use my pencil-lead instead of using it half-way.I also learnt many other small techniques to reduce wastage in my life which I had never thought before.” says Aradhana, a class 5th student from Government Girls Primary school in Kasan village, Manesar, Haryana.

The school gates open. A blue-painted Maruti Suzuki ‘Super Carry’ enters the gate. As soon as it enters, a crowd of children begins to surround it, curious to look at the bright yellow cartoon poster of an old woman on it. The woman is ‘Mottainai Grandma’, the protagonist of a world-famous Japanese children’s storybook by the same title.

Almost in cinematic slow-motion the doors of the Super Carry open. Children now feast their eyes on the myriad colours of the Mottainai storybooks, laid out on the shelves in an almost mathematical precision! At this point the crowd of children doubles, pushing and pulling each other to have a satisfying look at the colorful books. 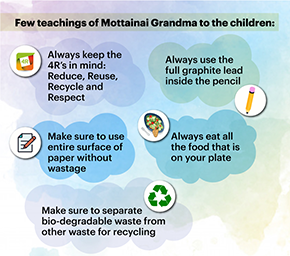 “How many of you eat oranges? Please raise your hands” asks Mottainai Grandma. Slowly the storyteller Jayashree Sethi in the disguise of Mottainai Grandma, enacts instances in front of children from the colourful story books.

Moving from one book to another she educated the kids on the principles of 4R’s (Reduce, Reuse, Recycle and Respect) in daily life. By taking the example of orange-peels, she educated the children about segregation of waste in appropriately-marked garbage-bins; hence reinforcing the idea of ‘Recycle’. She gave the example of food wastage to give children an idea about the concept of ‘Reduce’. Citing the example of scarce natural resources in the environment she motivated them to ‘Respect’ the resources provided to them.

Just like we learn life skills from the Mahabhrata or Ramayan from our Grandparents, these students imbibed the Japanese principles of environment consciousness and waste management from this Grandma!

The children were also made to draw posters on their learnings, thus reinforcing the concepts. The students quickly listed out many unique items that can be reduced, recycled, reused or respected from their lives.

The children’s adoration for the Grandma and their respect for her spoke that they didn’t want the session to end. With this the caravan packed up its accessories and headed off to the next school!

Restoring dignity and pride to rural women of Manesar

EXPLORE TO EARN
You Have Earned

Save My Points Know More